on Saturday I was up early and awaah across town to the Old Junior School, South View Road, Nether Edge, for the exciting launch of On The Edge Brewery. This was a great opportunity to try some new Sheffield beer and also to test the performance of that old chestnut "expectation" since I had persuaded myself in advance what some of the beers ought to taste like.

Whether expectation or anticipation, the sense of both had been building based on the release of various details about the brews on offer in the week before the launch so I couldn't wait to get there - literally. I arrived before any beer was served, with just Billingham alesman Geoff for company. 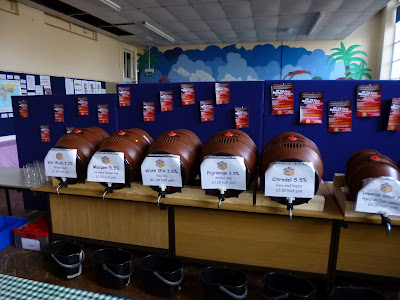 Sadly its probably recorded in the annuls of the history of the brewery that he bought the first half pint, whilst I was fannying around trying to organise pictures, change and discourse with the brewer, but that is the burden on the noble beer blogger. Or pisshead - I think the roles are interchangeable.... 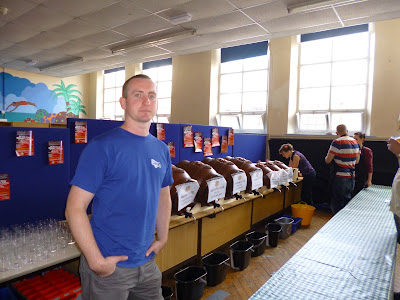 Things quickly got busy and it soon became apparent that punters would be following the same route, i.e starting low and then increasing the strength of beers tasted - that said, there were only pins of the strong stuff, so I was quite perturbed that I might have to embark on a less than wise beer early on. 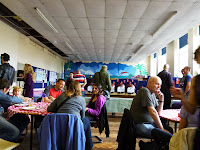 All in all I got to try all of the beers on offer, a temptingly broad selection of styles using different yeasts and a core bittering base as a platform for styles as divergent as smoked Maarzen wheat beer and Double IPA.

Here are the notes I made about each of the beers, possibly in order...

Wath IPA 3.8% £1.20 my first half was quite sweet and fruity initially, and after getting over my damaged by Greene King abhorrence at a low gravity IPA (I know, I know, IPA's needing to be plus 7% ABV is a beer myth, etc...) I found it very well flavoured for its strength, and a satisfying hoppy finish made this a good start.

Wit Wash 5.2% - £1.40 my second beer was a fantastic orangey refreshing wheat beer, using German yeast and slightly reminiscent of Weihenstephaner, although if I had one complaint, it was that it didn't stay cloudy throughout - I demand soup!

Citradel 5.5% £1.50  my first tainting by the gaunt spectre of expectation came with this orangey, slightly yeast prominent (but in a good sense, i.e not sour or anything) IPA which just didn't meet my expectation of how bitter it was going to be. I know Citra is a fruity hop but there was no depth to the bite and the hoppiness faded too fast.

Black IPA 6.0% £1.90  this was exactly what I expected, dry roast malts and bitterness, made with U.S yeast and mainly Cascade hops, possibly a mite too dry but definitely ticking the Black IPA boxes.

Maarzen - smoked Brown 5.5%  £1.50
Wow! A smoked bite that smacks you square in the chops, then attaches to you with its brutal burnt wood claws and refuses to let go for at least the first half of the drink. I really didn't care for this at first, but as I continued drinking it mellowed just enough to be the rich smoky beast that I had hoped for. The brave and commendable use of peated malt gives this an edge, no pun intended, and harshens the bite.

Imperial stout, 7.5% - £2.00 Spectre 1 - brewer 0.
Unfortunately this was not at all what I hoped for. It was dark, yes, it had stout character and robust dark malt flavours but it had a subtle taste lurking at the back which I couldn't ignore. A few sips in I realised to my horror that it had a fruity almost lambic sharpness. The world's first black lambic? I wasn't sold on this one, but I think this is an example of where the expectation scuppered its chances of having a fair assessment. One to revisit. 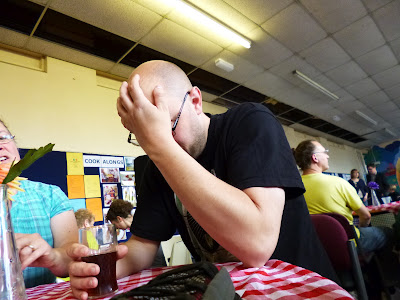 Pilgrimage, 3.9% £1.20 a reckless and unjustified slump in ABV had me arrived at this enjoyable earthy pale ale, still with a distinct hop (or maybe malt?) signature, but reminding me of the better sulphurs and chewy bitter notes of beers I know and love, but, erm,which seem to be hiding from me. Stood up well to the might of the darker one before. Brewed with Pilgrim hops, tha sees..

Double Gold 9.5% £2.50 Puzzlingly, there appear not to be any notes for this beer. Almost inevitably it was my last, but for some reason the pen appears to have become too weighty and cumbersome to wield under its influence. I recall being slightly underwhelmed by the bitterness, but my memories are sufficiently unclear to warrant a description no more than guess work, which would be harsh.

Overall this was a great festival/brewery launch with cheerful and knowledgeable volunteers and helpful  brewery staff Tom and Luisa, which was a great introduction to the breweries interesting brews. My favourites were the Wit (I had 3 of them, later notes proclaiming only "Yum!" ) the Maarzen and the Black IPA. 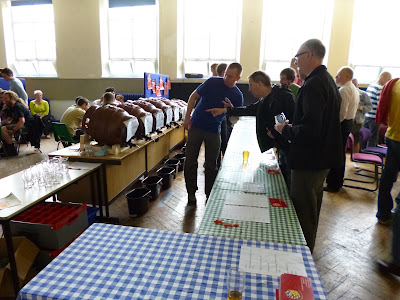 My only concern is, with a plant so small that, I think it can only produce 2 firkins at a time (or is it one?) where are we going to get hold of some more?

I suspect Steel City beer festival 38 might offer a helping hand on this one...