the above headline is perhaps a journalistic own goal, as it is based on fear and supposition and negative expectation. A bit like a shabby tabloid headline penned by an sad, heavy drinking, chain smoking tabloid journalist grubbing around for the latest Daily Mail scare story about nothing of interest to the rational minded.

However, it does have its roots in a serious subject. As many of you will have noticed and probably if you live in Yorkshire already posted about, the Victorian gem which is the Bath Hotel in Sheffield is to be taken over by Thornbridge Brewery  (I bet it hasn't or won't be bought by Thornbridge, they don't own pubs lest we forget). Discussion at a high level beer meeting in Harrisons 1854 last night seemed to lean towards dismay, anger, surprise and worry. I have yet to meet (only two days after I heard the news albeit!) anyone with anything positive to say about this latest change of, erm, well, again ownership may be misleading, stewardship... (?)

Aside from obvious concerns about price, inherent pretentiousness, the idea that they might buy in cheap as dishwater Italian lager and sell it as a premium product (my personal worry, difficult to explain am afraid, but for legal reasons I must make clear this hasn't happened!) ) and the lack of guest beers to grace the bar, my specific and justifiable worry is that they will ruin the interior.

To those of you who don't know or appreciate the Bath's interior, it is an intact 1930's refit complete with beautiful tiled and glazed bar and a glorious back room snug with original seating. It won the CAMRA/English Heritage pub design award in 2003 for the sensitive restoration of its original features and refurbishment (which may not be the right term) of the paintwork and upholstery to give a level of reassuring,  plain finesse which the pub retains and presents admirably.

The live music is free, the food is simple and inexpensive, the bar staff are helpful, the fixed seating is elegant simplicity, and the beautiful brown tiles and dark wood frame of the bar, with the eye catching black and white diamond tiled floor, sets off the scene perfectly. There is, quite frankly, nothing to be gained by change, even of the colour scheme. There is certainly, nothing worthy of loss or removal by an incoming manager, tenant or partnership.

Lets not forget of course, this is a Grade II listed building. Its listed on the merits of its architecture, and presumably because of its intact unspoilt interior. Only a fool would want to change the set up to stamp their "mark" on the building, only arrogance could sanction any watering down, bastardisation or ruination through modernising of such pristine pub stock.

So would anyone really be so ill-advised?

Well, having been in a number of Thornbridge run pubs I note a rather unsavoury love of pastel greys and light browns. A more cynical chap might muse over the prevalence of the shades watered down despair and troubling "movements". Light wood is great, in a restaurant, especially one searching a modern look. Its also great in newer pubs, or one with tired and sorry interiors requiring a revamp, or a touch of lighting up, to make it less dark and depressing. But spend one minute in the Bath Hotel and you know that's not required. Or warranted. Or wanted. 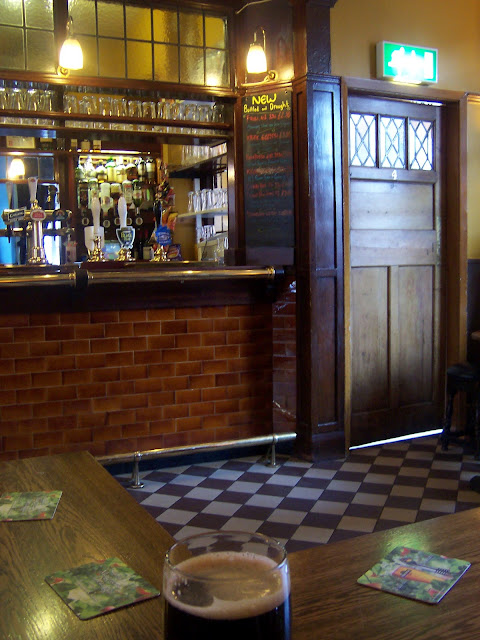 As usual I am behind everyone else covering this - Gettothepub.com have rightly (but infuriatingly!) beat me to a post on the subject, the link for which is here , and I'd encourage you to have a look. It seems Thornbridge have made assurances about the surfeit of other brewers beers, but I think the crucial point, and the biggest threat here, is the way they treat the interior.


A wildly unjustified, unsympathetic alteration to its character would be a travesty. No amount of expensive but usually good draught real ale and slightly more expensive bottles is going to soften the impact of a cack handed meddle with the layout or fittings. Lets hope Thornbridge prove themselves to be responsible sensitive stewards by retaining what sets this pub apart from most others in Sheffield and indeed South Yorkshire - its place on CAMRA and English Heritage's National Inventory of Unspoilt Pub Interiors.

I have never been a regular in a pub taken over by Thornbridge - although I went from time to time into Trippets, which was to be fair, far better decorated prior to being Dada. I don't like many aspects of the dour grey branding of the Hallamshire House, nor do I really appreciate the (initial at least) food  prevalance at the Coach and Horses in Dronfield and the Cricketers (albeit a food venue already), but I haven't been a regular in any pub subject to Thornbridgefication. Except now.

Thornbridge have form, and that's why lovers of this unspoilt interior should be concerned.


And finally, I should point out that, ironically, my first taste of Jaipur, when it was really good instead of OK (perhaps credit to it being slightly hazy), was in the Bath Hotel.  The very best pint I had of it was at Archer Road Beer Stop. Lets hope that I will be able to eclipse even that magical cask in the place I tried it first, and leave the Thornbridge owned Bath Hotel with a positive bitter taste in my mouth.

P.S - here is the link to the Heritage Pubs National Inventory entry for the Bath Hotel
Posted by wee beefy at 21:28