Lost, even on the Internet


firstly, can I make mention of the fact that I am aware that changing my blog name to be just a beer and pub blog from "Unspoilt British pubs and Cretan kafenions" has ironically ended up generating many more articles about unspoilt pubs. Granted, kafenion coverage is intermittent, but its still a typical scenario whereby you ditch something only for it to return to bite yer on the bum.

Anyway, I had been once again to the Classic Basic Unspoilt pubs of Great Britain list, and was struck by one entry, the Fir Tree at Cornsay Colliery, Co Durham. Not only is it incongruous in the list as it seems to be in an industrial area (almost every other listing is in a small rural location) but its not a million miles from the Dun Cow at Old White Lea. Also, it was similarly noticeable that almost nowt seemed to be findable on the tinterweb about this pub. Even if it closed in 1994 ( after the latest (ish) copy) its surprising that no-one has chosen to remember it.

I have managed to find a few vague references - a man in Oxfordshire references the pubs list, even if not the specific pub, and a local walker to the Cornsay area recounts some details at A rare reference to the Fir Tree (paragraph 7),  and local parish records reference the owners in days gone by as being (Fir Tree P.H.) Archbld. Dundonald Tomlinson. Yet, thus far, that's it!

I make reference to this only because, whilst am sure the tinterweb existed, albeit in a foetal form in the early 90's, am guessing that the author RWC didn't or could find no point in using it. So it would appear that he fulfilled his search and compiled his list on hearsay alone. If so, what an inspiration that he could have made such comprehensive investigations on this basis, even though of course, the GBG would have listed some of them. I find it a struggle to unearth unspoilt pubs now using the might of info on the WWW, but even though the passage of time will have put paid to many, its highly probable that in addition to some canny research, much of what the list author knew came from asking people.

Perhaps some choice personal hearsay could unwrap some facts about some of the pubs on my list earlier this week. I would be eternally grateful for any info on open or closed "gems" if anyone has any.

In the meantime, given that I have no image of the Fir Tree since I found out about it only 3 years ago when it was, as tinterweb confirms now, likely a farm,  here is a pic of the erstwhile classic that is (was) the Dun Cow at Billy Row, Co. Durham,visited by me, WF and Mr P some months after it shut... 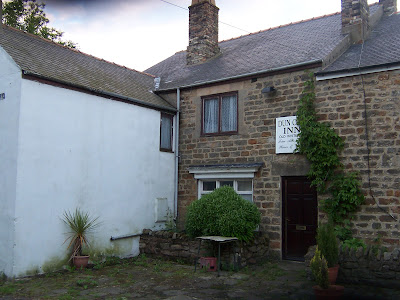 (I recall that another sign, perhaps on the side, proclaimed the "famous Dun Cow Inn". It was a target of mine on 3 trips North but I was scuppered twice by time constraints and unreasonable mileages, and lastly, by it closing down. An account of a visit to the pub was posted by one of the Southern CAMRA branches around 2007 but I can't find it anymore -  since then its a patchwork of forlorn memories, not least for me, given my wretched record of visits.