Cameron to sort out scandal of drink abuse - seriously, now we really are all doomed....

never read a tabloid newspaper (even a free one). Its scaled down fact light style means you are guaranteed to swallow the negative  or positive flavours they desire without being able to taste the story for what it is, as (attempted to be) demonstrated below...

I read in a rag, sorry, newspaper, this morning, that Moon faced Old Etonian man of the people David Cameron is going to use his position, power and legislative might to "tackle" the scandal of alcohol abuse. Having seen the Con-dems fuckwitted approach to HSBD, I had very grave concerns even before I viewed the copy that this was going to be the mother of all sledgehammer and nut, misguided, ill thought through knee jerk, health lobby stained, unrealistic, ignorant stabs in the dark ever. So what does this pampered aristo really have in mind for the unwashed proletariat ?

Well, firstly, for legal reasons, its probably only fair/safe I link you to the article, and apologise to anyone who thought that I was a reasonable minded man, for reading the Metro, which as any fule kno, is the Daily Mail in disguise. In my defence, in these hard times, its free. And am usually barely awake reading it. I still feel I ought to apologise for being such a wannabee fascist though. See tarticle at : Metro report slapdash irrational swiping at anything that will grab headlines, or Con-dem policy, article.

Said article also showed that Cameron had taken the "tackle" battle cry a little too literally, and behaved like an absolute cock.

Worse, the feature highlighted figures exclusively relating to the cost of alcohol abuse, and the wider costs to the economy of excess, which is an admittedly cringe worthy sum in the £billions. So I thought that the only acceptable approach to tackle these cstly ills would be to announce measures against the binge culture, specifically, I imagined,  the ease with which you could get hold of cost price or loss leader alcohol, often if you are underage, and crucially, I expected the mooted action to use law and legislation to improve stabilise and empower the places where it was statistically more likely that you would be drinking responsibly. That's right - back supervised consumption, support the British pub!

In doing so, any rational human would expect that the Government's plan would, having taken advice from all interested parties (i.e not just the lobbyists acting for the soon to be privatised health industry) introduce taxation to manage the supply of drink at home alcohol, whilst simultaneously allowing and pursuing a reduction in alcohol duty for certain drinks types, meaning it was more enticing to visit the pub on cost grounds.

I know this won't be easy. For a start, our friends in the multiple tiers of pub ownership would have to be on board - after all, alcohol tax relief alone can't free tenants from the absurd demands and unjustifiable double figure percentage rent hikes of the pubco's. Its obvious that the resultant unbalanced sums being asked for over the counter in such pubs deters those watching the pennies, but at least a duty or tax cut would see to half of that problem.

And then' having correctly identified the source of alcohol misuse, (a-la scandal of drink abuse) and the requisite parts of the drinks sector that facilitated this, maybe the plan could include measures such as toughening powers for license revocation of problem bars, and effective action on errant sellers of alcohol to minors, and cutting off the supply of illegal imports.

So, having idealistically and perhaps emotively cobbled together my own plan to address "the scandal" in my head, I hoped the article would be chock full of pertinent info from the Government about how they would go about achieving at least some of the above, and hopefully, provide firm details of the measures they had in mind.

Hyperbole, scaremongering and health profession sanctioned guilt trips : Yes.
Rational arguments for reducing the tax and duty burdens on brewers and the pub trade so a higher percentage of those consuming alcohol do so in a controlled environment - No.

To illustrate the kind of sensational shock headline accompanying the report, below is a picture of a man who may have been a trifle refreshed on his stag do. To be fair it was Wee Keefy;s fault that, erm, whoever this is got covered in ale, owing to an "Am I videoing/Am I taking a picture" mix up. So there. 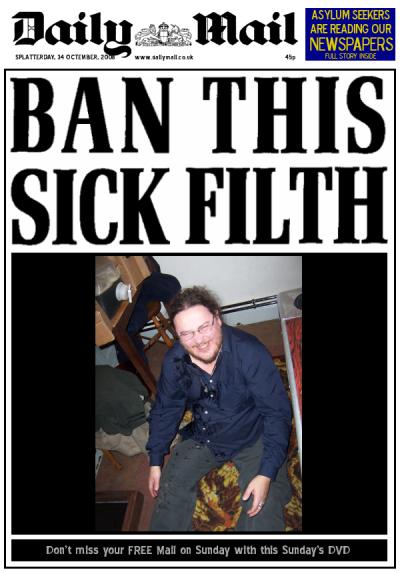 But don't despair, fighting to get seen in amidst the insinuation that all consumption was scandalous was an actual suggestion. Naturally Cameron, flanked by someone no doubt far too well paid to have lowered themselves to visiting a public house, or to understand the percentage of an average wage taken to buy 568 ml of beer in a pub versus the same in a supermarket, mentioned precisely nothing that would be done, in real terms. It was left to his party line towing sidekick to mention the only actual detail of the plans (or lack of them) the holy grail that is minimum pricing.

Laughably, Cameron even implores the bars supermarkets and drinks industry to "make responsible drinking more than just a slogan" when, er, as a two word soundbite referencing the widely complex myriad of factors considerations and assessment present in the study of alochol consumption, thats precisely what it chuffing is.

Better still, in true right hand wipes arse and left hand eats from right hand political campaigning, some Tory MP and GP (two masseev salaries? Thats just greedy) creates her own throwaway moralistic slogan -  "these figures show that cheap alcohol is anything but" she whines, through a haze of self congratulation at her wordsmithery.

So, in essence, a wearying display of flim flam and worthy hot air is the premise to another raft of shitwitted legislation, and the only fragment of thinking to make it out of the cauldron whole is the unbalanced idea of minimum pricing. In short, this suggests you regularise the minimum alcohol unit costs in all sectors. This means that pubs don't get any relief but supermarkets have to hike prices, rather than bringing pub prices in line with supermarkets so there is no massive financial reward for drinking at home.

At this juncture, I should point out that a quick read of Tandleman's blog on the subject highlighted to me many of the glaring problems with yet another sledgehammer to crack a nut bill of unjustifiabl unfairness, the bare bones of which I have tried to put my own spin on above. To make this a fair and honest post, and since I am too lazy to read the relevant tinternet coverage of the idea, I will link you to Tandleman's post on the subject. Tandleman deciphers minimum pricing .

Anyway, since the idea I proposed will never happen, and remembering that I firmly believe that driving growth and sustainability in the "drinking when supervised" market (pubs etc) is the only way forward, the more logical alternative, as alluded at points through my jibbering, is to reduce the amount of tax paid by and in licensed premises (maybe the reduction to 5% tax mooted by Robinsons).

This measure would have to be taken simultaneously with targeting the freedom to import and thus ease to sell unregulated alcohol out of the back of  a van, and, by banning the sale of alcohol at cost and as loss-leaders. All of a sudden (well, Christ, many decades away I suspect) you can go out and enjoy the social side of drinking in a controlled environment without bankrupting yourself and paying towards the UK's contribution of 40% of all Europe's beer tax. What fun!

So, what if none of these points is taken up and minimum pricing becomes the central plank of Government alcohol policy? Well, individuals will have no cheap options to get alcohol legitimately in the UK since supermarkets will be as expensive as pubs and pubs, as so often demonstrated, are already well outside many people's price bracket. So illegal and black market selling will flourish, and both the supermarkets and the pub indistry will suffer. Even if you dislike retail behemoths as I do, the flipside effect of not improving the lot of the British public house is too costly a risk.

And then we really would all be doomed